Drama
TBC Play trailer
Back To What's On
Select a Cinema
5:35 pm 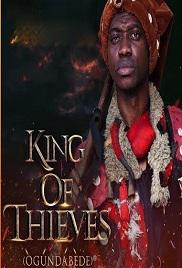 King of thieves (Agesinkole) is an epic tale of Agesinkole, an all-powerful Bandit and his reign of terror in the prosperous Kingdom of Ajeromi. Concerned by his pillaging, the kingdom moves to destroy him, through the hunters, witches and priests, thus beginning this adventurous saga of revenge, bravery and glory.